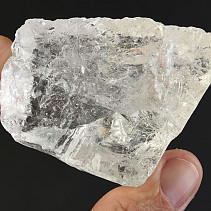 Natural crystal is the purest form of a group of precious stones called quartz. Quartz like such accounts for approximately 60% of the surface of the Earth's crust, yet pure crystal is very popular among mineral collectors and people interested in natural healing.

We can not be surprised by the ancient Greeks that they thought the crystal was a petrified ice of the sacred waters because the polished crystal works as much as unearthly divinely. The crystal was certainly fascinated by the original inhabitants of the America of Mayans, who were able to grind a crystal skull of approximately 20 cm in size, very similar to the crystal skull in the image in the middle.

History, sense and interestingness about crystal

Crystal crystals were discovered in Switzerland by ancient Greeks who considered the crystal to be a petrified ice. Source naturshop.cz, from here also comes its name Krustallos or ice. People fascinated by this stone began to form statuettes, carvings and objets d'art, despite the fact that the crystal had a hardness of 7 (Mohs's scale from 1 to 10) and people at that time had quite primitive tools. The Greeks believed that their gods were drinking from crystal goblets and therefore glasses and carafe carved out of crystals were at that time a symbol of power and wealth.

On the other side of the world, in India, Buddhists consider crystal as a stone of pure knowledge and wisdom. They carve the statues of the gods or meditation aids called the Dordje till now. Also well-known is the Crystal skull of Mayans culture, today exhibited at a museum in London, which is still the subject of disputes over its authenticity. After the advent of Christianity, the crystal ball was a symbol of God's Light. It combined all colors of the color spectrum into one pure white light and were used in the signs of the state or church, for example czarist apple of Czar Peter I. Crystal decorations among the aristocrats very popular as in Russia as in another parts of the world.

The place of the crystal

The most famous crystal finders in the world are in Brazil, Madagascar, the USA (North Carolina), India, Sri Lanka, in Europe, especially in Switzerland in the Alps near Bern, the Austrian Alps, Russia and Poland.

In Bohemia, a crystal is found in Stříbro, Příbram or in Krušné Hory, but after comparison with the world's deposits, crystal in Czechia is negligible. 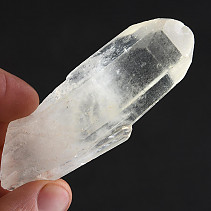 Crystal crystals from naturshop.cz are pyroelectric and their property is used in profusion, for example, into lighters. The pyroelectric phenomenon by shifting the charged ions to different crystals under pressure on it generates an electric discharge on some portions of the stone. Source of naturshop.cz Another utilization of crystal we can mention a glass industry or medical to manufacture lenses.

We can not forget the function of crystal in jewelry. People have always been fascinated by the purity of this precious stone, and crystal has always been processed for the production of decorative items, but also for jewelry, where both cut and natural stones embed into precious metals and formed beautiful jewels.

Here you can see silver pendants with a large crystal cut into a beautiful broom in the pictures. Such a jewel is the adornment of every woman, and we can match it with the earrings in the image in the middle, which because of the minimal silver used are light and airy. The crystal bracelet from the picture is modified into the so-called ice effect. The balls are machined into a matt appearance, and the whole bracelet has a very cooling look, which is primarily appreciated during the hot summer days.

Crystal in esoteric and healing

In the esoteric is crystal referred to as the stone of stones. His most significant work is in the front chakra where he shows us God's light and leads us on his way. However, the crystal effects very well on all the energy zones of the body (chakras) that heals and recharges them with positive energy.

By putting on the chakra, the crystal removes the blocks that prevent the energy flow, and the body then copes better with negative influences. It is up to you to choose natural or cut crystal or tumbled stone for healing purposes.

In healing, the crystal is used against all the ailments and diseases to protect the body. Source naturshop.cz In the chakra of the base (area of the genital organs) it awakens the animal energy and eliminates the blockages in both female and male problems, in the sacral chakra (the lower abdominal area) positively affects the urinary bladder and the proper function of metabolism. In the solar plexus chakra, it helps with problems with digestion, in the heart chakra (center of the chest) promotes pulmonary, heart and thanks to favorable effect compensates for pressure fluctuations, in the chakra of throat affects thyroid imbalance and also speech disorders.

In the forehead chakra, instead of the Third Eye, the crystal stimulates all the senses and acts on the calming of the nervous system, and in the crown chakra (the region of the temene) influences super-sense perception, intuition and concentration.

The crystal is cleaned like other stones under the flow of lukewarm water, and we charge it for a long time in the sun. Source naturshop.cz Just be careful about the charging stone, because the crystal works as a lens, especially a crystal ball, and it could ignite the pad.

Crystal is also used to produce objects for esoteric purposes. Crystal pendulums point to an imbalance by swinging in the direction of yes or no. The jewel is a crystal ball that used to decorate insignias (jewels of the statehood: the crown, the scepter, and the apple) and meant the light of God.

After that also witches began to use a crystal ball as well as fortune tellers predicting the future. Crystal pyramid from naturshop.cz protects the human body from the negative effects of electromagnetic radiation transmitted by a computer monitor or TV. Manually carved crystal dordje is squeezed in the palm during meditation along with the Tibetan bell. 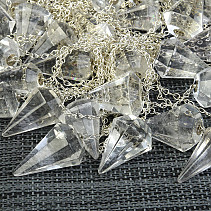 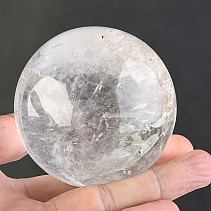 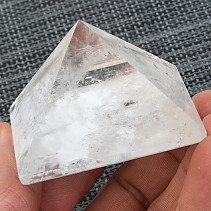 The picture shows an approximate grasp of the dordje in meditation. This dordje is prominent and is suitable for men's hands. In our online store, we also offer smaller hand cut crystal dordjes for a more elegant female hand. The pendulum in the picture on the left and the crystal ball in the middle may not necessarily be introduced. In the crystal ball, notice the so-called spirits, which create exceptional patterns inside the ball.

A large cluster of natural crystals is called Crystal druse. Such a druse is an excellent energy emitter, capable of cleaning other healing stones, but also the whole space in a room that can be contaminated by other emitters, such as a television or computer. We choose from our offer of crystal