Smoky quartz is a variety of quartz, which has a transparent smoke color, which apparently originated natural irradiation of silicon oxide. The emergence of smoky quartz is still not entirely clear, but the occurrence of smoky quartz is always in areas where it is also found small amounts of radioactivity. This radioactivity is so low that a person is not dangerous and certainly not true that the kind of smoky quartz is transmitted to humans or the environment in which they live, rather the opposite. As naturshop.cz found smoky will discolour once formed with crystal, which is very interesting, as other gemstones and minerals impurities discolor during crystal growth so that various chemical elements gets stuck in their crystalline lattice. Colouring smoky quartz takes place so that the impurity aluminum sticks in the crystalline lattice of the crystal during crystal growth smoky quartz, but the whole crystal turns up long after it has hidden natural radioactivity in rock masses. Krystal smoky quartz is usually the most color on the tip of the crystal.

Quartz crystal shape clearly shows that Morions most colored tip of the crystal, where the darkest color, the root of the crystal is not smoke coloring almost clear. Eggs of smoky quartz in the picture to the right is cut so that the color is the most rich in the middle, so the egg has integrally colored impression. Both smoky quartz comes from Madagascar and a large range of gemstones including smoky quartz from this locality, visit the online store www.naturshop.cz.

The largest deposits of this gemstone is Brazil, followed by the USA in the State of Arkansas or California, smoky quartz interesting sites in Africa, Madagascar and Namibia. Smoky quartz can be found also in Europe and in the Alps, particularly in Switzerland, Austria, Italy and Germany, in Russia and in Scotland, where it comes from very dark to opaque quartz Morion.

Smoky Quartz has a hardness on the Mohs scale number 7 (out of 10), so it is quite hard and the color is slightly more stable than the amethyst. However naturshop.cz advise that all varieties including quartz smoky quartz should not be exposed to direct sunlight. Smoky Quartz is a very interesting gemstone with a mysterious character and are widely used in jewelry , into which it is cut into diamond or modern irregular sanders.

Smoky quartz in the esoteric

Quartz stone is very popular among esoteric and healers for its ability or help in the treatment of psychological disorders such as depression or feelings of inferiority or uselessness. This gemstone shows us that even dark smoky quartz can penetrate pure light, which can symbolize the light of God or just pure energy in us. This light dispels the gloom even in the dark period in our lives when we suffer lack. From these material weaknesses by means of smoky quartz naturshop.cz can be freed, as well as from various addictions such as smoking or drug addiction. quartz also has a powerful detoxifying effects, helps rid the body of harmful substances, thus greatly help cleanse the body of toxins, which drugs or cigarettes certainly are. The very smoky but depending rid of you, you may want to just yourself and smoky quartz is just a helper and friend, from which you can draw support.

As already mentioned, detoxifier smoky quartz, are used in various diseases and also in chemotherapy when dealing with weakened body toxins that kill cancer cells, but he himself. Detoxification Morions operates on the actual cancerous cells, with which the body itself better settling, particularly in the initial stage of the disease. At the same smoky quartz helps with pain and release tension in your body and muscle cramps.

Smoky Quartz, if you use it for healing, it is necessary cleaned after each use and recharge. In diseases such as cancer, smoky quartz cleaned very often, preferably after each use under lukewarm water or in a bowl of water along with the crystal. Smoky Quartz, charge the moonlight or charged Crystal Druze all night. Smoky quartz rather not be exposed to direct sunlight, not to lose the its mysterious and magical color. 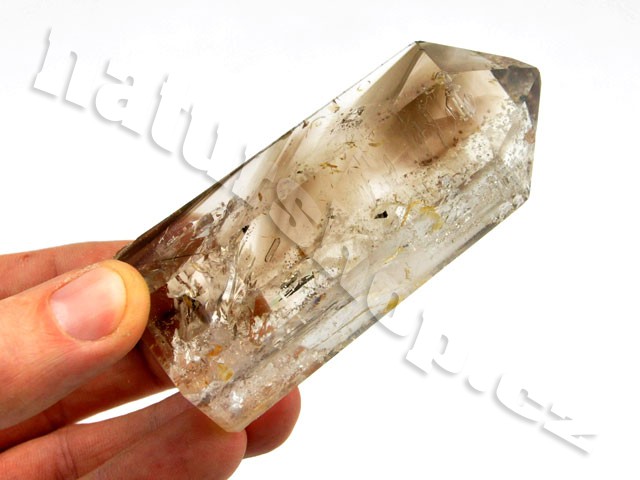 All text and photos are property of Naturshop.cz are protected by copyright and trademark. Distribution of the texts of precious stones without the consent of the owner is prohibited.