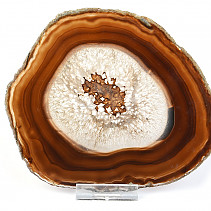 The original name of the agate comes from ancient Greek, according to findings at the Achates River in Sicily (today's Italy). After finding agate looking like a dirty clod of clay, it was polished or cut into slices, an exciting agate structure with earthy color appeared.

The extensive color palette of brown, gray and milky tones arranged in layers, creates a wealth of ornaments and interesting shapes. After polishing, the agate acts softly with waxy shine.

Agate with noticeable striping stimulates our logical thinking and concentration. Agate is recommended to wear as a pendant because it is closest to its chakra in the area of the heart where it opens the heart to love. Healing uses Earth's ability to ground both in the emotional and intellectual spheres. It helps us better to concentrate and find balance in the things and phenomena around us, even in positive and negative energies inside the body. Imbalance of energies in can accompany suppressed feelings and desires and various diseases of psychosomatic roots. Agate strengthens our self-confidence, awareness of own personality and confidence in our abilities. As a side effect of this slower, but longer-lasting self-awareness, there is the choice of the right words in communication with both friends and enemies.

Agate is a commonly available stone, which can be found in the Czech Republic, such as the Agate from Halže. In the world are many locations, the number is uncountable, just as many types of agates. The most famous mines are in Brazil, Madagascar, where exciting silk agates with dendrites come from, Botswana and other areas in Africa.

Large pieces of agate are cut into thin, translucent slices, which are favorite decorations to the apartments or offices. These slices and whole gemstones are often dyed for a more exciting look, but these dyed slices are not very suitable for the healing.

In both pictures, there is agate's earthy brown color with a striking lineation that is so typical for this gemstone. Here we can see the attractive natural stone surface and its beautiful color after polishing it from the front. This type of agate is often used in libraries as a stopper.

In this picture, note the diversity of individual tumbled stones.

Agates from Botswana have predominantly gray to pink coloration that causes Manganese compounds. As a brown agate has also this pink one the typical agate layering. These agates have a beneficial effect on the human brain, with which it harmonizes and helps to bring more oxygen into the brain.

A man looks at the problems with a clean head and better-detached view. Pink agate is highly recommended for smokers who want to stop or to people working in a smoky environment.

Dendritic agate, or also a dendritic

Dendritic agates have a silky glass up to brownish structure with dendrites, that can resemble twigs of ferns or other leaves. The most famous locality of these interesting agates is in Madagascar, where larger pieces of these semi-precious stones come from. Dendritic agate is a stone of abundance and power. He needs plenty of time to do his work, but it's more powerful and more durable. Dendritic agate can be used in business, where it helps to increase the company's revenues, but also creates a calm and peaceful atmosphere in the work environment. In private, it helps to enjoy our lives fully and on the contrary keep our concentration if needed. In physical health, this type of agate is suitable for regaining the chakras equilibrium and puts the nervous system and fluid flow in the vascular system in order. Harmonization of the nervous system leads to alleviation or even suppression of migraines and headaches. Regarding the slower onset of the influence of the dendritic agate, it is good to wear the stone always with you, for example, as a pendant right at heart. Due to the excellent effect on the correct circulation of fluids inside the body, it is good to place dendritic agate near the flowers that awaken to life.

Beautiful silver pendant from agate with dendrites like twigs wear close to the heart at a longer chain, preferably also silver.

The moss agate is named after its unusual appearance. It has a clear to milky color, in which manganese dendrites resemble a soft forest moss. The view of this stone is very refreshing. To the people who rely heavily on their intellect, brings to life a spiritual dimension, and on the contrary, those who rely too much on their intuition turn in a more practical way. In both cases, it develops our ability to get better with people, to identify with their life situations, and to learn not only from their but also from own failures and mistakes. With its green vestiges resembling the moss, leaches this moss agate from naturshop.cz looking at this stone the stress and by extended use of the gemstone, also depression and fear. In the physical plane, this type of agate helps in the treatment of inflammation, has a very positive effect on wound healing and pain, especially in childbirth.

As the name suggests, this vital stone is associated with our sexuality. Its fiery coloring promotes vitality and taste. The basic color of the fire agate is earthy rusty to dark brown with fluorescent bubbles in a rainbow greenish-yellow shade, located in Mexico and the USA. In esoteric, it is used for meditations attached to the so-called third eye (area of ??the front chakra) and helps to release the body and mind and open the mind to new positive thoughts towards courage and perfection. If internal energy flows are interrupted in the body, we attach a fire agate to individual chakras to re-connect and harmonize the energy flow inside the body. With this use, the agates from naturshop slowly harmonize the glands with internal secretion, the total circulation system and accept the hot flushes during hormonal changes. We can always carry a fiery agate in the form of a bell or jewel, and we can charge it in direct sunlight with no time limits.

The image shows donuts of fire agate in the earth's rusty shade like hot coals. The donut has a round shape with an opening that provides energy circulation in the body. It can be used in meditation or worn on the skin as a pendant, which is very popular. In the next picture are the dark-brown pebbles of dark agate with visible bubbles in green-yellow hue. This type of agate comes from Mexico.